It all started when he arrived at Riverside Medical Center’s Emergency Department with bad abdominal pain. Testing revealed a blocked artery in one of his kidneys—and much more. Choquette had a cluster of cardiac problems, including a very weakened heart. His heart was pumping at about 10% of capacity, says Jennifer Dole, CCNS, an advanced practice nurse and a member of his care team. (A healthy percentage is about 50%.) In other words, Choquette had severe or critical heart failure.

Doctors also found an irregular heart rhythm, called atrial fibrillation (AFib), which can lead to life-threatening complications without treatment; an aortic aneurysm (a dangerous bulge in the large artery that carries blood from the heart); and a malfunctioning valve in his heart (aortic stenosis).

Choquette had fatigue, sleep troubles and shortness of breath as a result of these heart issues, but the 59-year-old Kankakee business owner, husband and father had chalked it up to Father Time. “I just thought it was age,” he says.

Choquette needed open-heart surgery to address his heart problems. But his weakened heart needed help getting through the operation. His cardiothoracic surgeon, Sinan Simsir, MD, knew what to do.

Dr. Simsir temporarily installed a tiny device called an Impella heart pump in Choquette’s left ventricle. The device helped pump blood out of his heart, allowing it to rest and recover. Dr. Simsir then replaced the faulty valve, repaired the aneurysm, treated the AFib with ablation (burning or freezing heart tissue to create some scarring, which breaks up the electrical signals that cause irregular heartbeats) and removed a heart appendage to keep blood clots from forming there. Dr. Simsir was able to address all of Choquette’s heart problems without a heart transplant or a permanent heart pump, which are often options in cases like his.

“This is why we all got into heart surgery—to help people live better and longer,” Dr. Simsir says.

Choquette received the kind of advanced surgery you might expect only at metropolitan medical centers. But he was able to receive that care close to home and family, thanks to the expertise of his Riverside team. “I had confidence in listening to the team at Riverside and Dr. Simsir.” Choquette says. “He was clear about what needed to be done, and his confidence gave me confidence that I didn’t need to go to Chicago.”

Riverside can manage even the most complex medical problems, right here in the community.

Making the most of a second chance 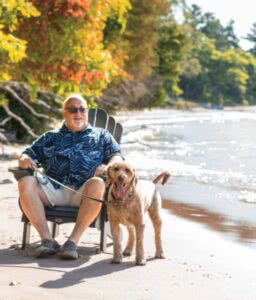 Choquette still faced a long and challenging recovery, including a stay in the intensive care unit and inpatient acute rehabilitation. “He had a lot of people around him, and a team of good nurses put in a lot of good work for him,” Dr. Simsir says.

By summer, Choquette had returned to work and to enjoying life, including walking his dog, golfing and spending some relaxing days at his family’s northern Michigan cottage. “He made a dramatic recovery, more than we were even expecting,” Dole adds. His heart is pumping much better now, around 35%. He sleeps better and feels more energetic too. Choquette credits the Riverside team with saving his life. “I am so glad I chose Riverside Healthcare,” he says. “They genuinely cared.”

**Helping people live longer and better. Find out where Dr. Simsir got his passion for medicine—watch the video at RiversideHealthcare.org/simsir.

Check out our podcasts